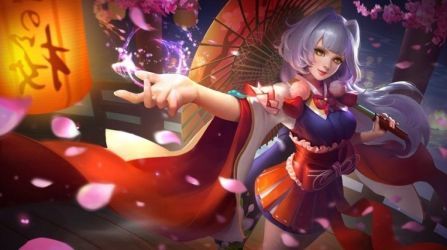 Today I am going to show you my Kagura Gameplay in Mobile Legends. We will also discuss builds, game strategies, skills, and combos.

Kagura is one of my favorite characters because she reminds me of Goblin Shredder. I also like her more now because she is not overpowered. I usually get bored if I keep on winning. And with Kagura, it’s a bit tough.

Controlling her movements and skills in the game can be very challenging. She has a skill that allows her to escape, but she can also be very squishy.

Unlike most characters in the game, she has a very long combo. Two of her skills have another effect depending on the scenario. So it’s like having five active skills instead of three. My thumbs usually suffer when I’m using her in the game.

I have two Classic gameplays that I would like to show you. 😀

If you are new to Kagura, you can jump to the Skills and Combo section before watching the gameplays below.

Gameplay #1 – If you have Good Teammates

Gameplay #2 – If you have Tougher Opponents

I don’t completely believe the suggestions about the best build from other game guides. I think you have to adjust your build depending on the situation.

If you see that the enemy’s assassin is killing more in the first few minutes, you can equip a basic item that can protect your character from physical or magical damage depending on the damage type of the assassin.

The second factor that you need to consider is the Tank of your team. If you see that you have a skilled Tank, you can equip full offensive magic items. And then you just have to worry about enemy characters that can easily pass through the Tank (e.g. Fanny).

Since I’m getting ahead on the character level, I equipped Lightning Truncheon as the first damage item. It can inflict serious magic damage in the early game and the damage scales as you increase your mana through other items or by leveling up.

However, your hero will be squishy in the early game because it does not increase your HP or defense. It’s hard to survive with this item alone if you were attacked by assassins like Fanny, Lancelot, or Selena.

If the enemy is too skilled or has too much damage in the early game, I usually equip Glowing Wand as the first item. It’s also powerful and it adds 400 HP which could help you survive the damage from one or two skills from the enemy.

I also equipped Demon Shoes so I will not run out of mana because almost every player wants to get the blue buff.

When roaming the map, you can use Skill 1 on the bush to check if there are enemies. Use this with caution because you become vulnerable to disable and stun if you are not holding the umbrella.

This is also the reason why I make sure that I get the umbrella back immediately after Skill 1 when farming minions and jungle monsters.

Also, keep in mind that you are a Mage Reaper. During group battles, the best time for you to use your Skill 3 is during the middle of the fight when the enemies are clump together and have already used the skills that allow them to jump.

Continuing with the gameplay, I also equipped Divine Glaive because it allows me to farm faster.

Since we have no Tank and the enemies are also getting stronger especially if they attack together, I also equipped Winter Truncheon for survivability.

Some players may not agree with equipping this item because it has less magic power compared to the other end items. But I think it still depends on the situation.

If the game continued and you have earned more gold, Blood Wings can replace weaker items. It’s a bit expensive but very powerful.

In Gameplay #2, I have to get items that would increase not only my magic damage but also my HP. This is because the opponents are a bit tough. They have Guinevere and Chou who have long disable and Gusion who can kill you instantly. They also have Khufra who can cancel jumps.

These four characters are excellent counters to Kagura. They can easily chase, disable, or kill you. And they can easily escape your skills too. I cannot gank alone because they are also very durable. They will ruin your game if you let them. We have no Tank so I need to play safe.

I equipped Magic Resist Cloak at the start of the game which is the most basic anti-magic item so Guinevere and Gusion’s skills will not kill me instantly.

I also equipped Glowing Wand, then Clock of Destiny, then Concentrated Energy because of the situation. All three items have a combination of magic damage and HP.

The strategy would be to survive long enough until the Marksman has items that can deal a lot of damage and Chou is strong and durable enough.

In order to do this, mini-map awareness is crucial. Don’t stay long in one location. Check the bush using the umbrella, but always be ready to escape in case the enemies are in the bush.

Four enemies can easily move around the map because of their skill, so chasing any of them will gather the rest of their team members that can easily kill you.

I also equipped Winter Truncheon as a temporary item for the invincibility and additional physical defense. The invincibility is also effective against Gusion’s Sword Spike skill as long as you are near the tower or close to your teammates.

Then I equipped Divine Glaive because I need to have more magic damage and to easily clear the enemy minions. Again, if the game continued and you have earned more gold, Blood Wings can replace any magic damage item.

We won the game, but I was not aware that the video stopped recording near the end because there is a 2GB limit for each recording.

This skill allows Kagura to throw her umbrella in a straight direction and deal damage to those who were hit by the umbrella.

The challenge with this skill is that when she throws the umbrella, it does not move from one point to another point instantly like Gusion’s Skill 1 (Sword Spike). There is a very slight delay.

So an enemy that can move fast or has a jump skill can easily predict the direction of the umbrella and avoid it.

Also, because of the slight delay in the travel time of the umbrella from one point to another, you cannot just press it and expect it to hit a moving enemy.

So if you are trying to hit a moving enemy, make sure you place the travel endpoint of the umbrella about two steps ahead in the direction where the enemy is moving.

This skill has two effects:

If Kagura is holding her umbrella, this skill allows her to jump in your preferred direction.

This is a very powerful skill because it removes all debuffs and allows her to jump and escape. This means if she was stunned by the enemy, she can free herself. With this skill, she can easily escape several deadly ultimate skills of the other characters.

If Kagura is not holding her umbrella, this skill allows her to jump instantly on the location of her umbrella.

Kagura is at her most vulnerable moment when she is not holding her umbrella because she cannot escape any stun or disable if she was hit at that moment.

So as much as possible, always keep her umbrella with her.

This skill also has two effects:

If Kagura is holding her umbrella, this skill allows her to knock back the enemies that are very close to her dealing damage and slowing them for a very short period.

If Kagura is not holding her umbrella, this skill allows her umbrella to create a link to nearby enemies, reducing their speed. The link alone has minor damage.

If this effect is activated while the enemy is in contact with the umbrella, the enemy will take the full damage.

Do not activate this skill if the enemy is not in contact with the umbrella because he will only receive minor damage.

The second damage of this skill happens after three (3) seconds if the enemy was not able to get away from the range of the link.

If they are still linked with the umbrella after three (3) seconds, they will be pulled to the umbrella and take another huge damage.

Note that three (3) seconds link will not disappear if Kagura uses Skill 2 (or Skill 1). If she uses Skill 2, it will take her to her umbrella and the link will move with her.

This means that she can run towards a linked enemy that is trying to get away in order to maintain the link. But of course, do this with caution because you are also entering the enemy’s range and the enemy may still fight back.

One more effect of this skill is that it resets the cooldown of Skill 1 and will allow Kagura to hit the enemy again with Skill 1. What is cool about this is that if you use Skill 1 within three (3) seconds after the reset, the enemy will receive BOTH the Skill 1 damage and the Skill 3’s first damage again.

This passive is triggered when she comes in contact with her umbrella. Below are two instances:

If Kagura uses Skill 2 while she is not holding her umbrella, she will teleport to the location of the umbrella. The passive skill will activate and it will give her a temporary shield, it will stun the enemy around her where she instantly teleported, and it will slow down the enemy for a very short period.

If Kagura runs to her umbrella, this passive skill can also be triggered.

This skill can only be triggered every 4.5 seconds.

Kagura has a very long combo and you need to press the skills faster.

When ganking a lone enemy, you can use the below combo:

During group battles, you can use the below combo if you do not have Winter Truncheon:

In this scenario, you cannot just use number 4 in the first combo, or you will die before the enemies are pulled. Let your teammates do the hitting while the enemies are linked to your line.

During group battles, you can use the below combo if you do have Winter Truncheon:

That’s it for my Kagura gameplay.

I hope you enjoyed it. 🙂